One of the things that I admire most about Valerie Musyimi, 17, is her confidence, some of which she draws from her budding career as a high fashion commercial model — she is currently under the agency Angie’s AMTI in Ottawa, Toronto, Canada. In the first post of this 4-part series, she shared with us her passion for social activism. In the second post of this series, Valerie shares with us her experience in the modeling industry, together with some rewarding moments and challenges:

When, where, and how would you say your love for modeling began?

My love for modeling began when I was very young (at about 5 years old). I was a very girly child growing up — I loved my barbie dolls, barbie movies, cute dresses, heels, jewelry, you name it. This passion for dressing up and the catwalk grew into my love for fashion tv, a channel that showcases only runway shows 24/7. I would stay glued on fashion tv for hours on end admiring the different designer collections and the astonishing creative looks, from the hair to the makeup, shoes, and accessories. I would also feel some sort of comfort seeing the models being able to amazingly portray their physiques. This is because I was, and still am, quite slim and I didn’t feel very comfortable in my skin growing up, especially having been brought up in an African society where a woman’s body is supposed to be ‘thick’. As I looked up to the women I would see on the runway shows looking confident and displaying their impeccable gait, adorning the finest fabrics, and boasting hair and makeup for the gods, I knew that ah! Even if I would not be able to do that for a living (little did I know), I would be the happiest person to experience all that for just a day.

What motivates you to continue modeling?

My motivation to continue modeling is the confidence that it gives me. I have never felt as empowered as when I step on the runway, knowing that without saying a word, I summon all the attention in the room, with all eyes and cameras on me at that moment, as I catwalk displaying my designer creations.

I am also motivated by my desire for more diversity and inclusion in the high fashion commercial modeling industry. Currently, the industry is predominantly caucasian worldwide. There have certainly been some improvements over time with more models of color working with high value brands in the industry, but there is still a lot that needs to be done on the issue of inclusion. This is why I am actively participating in the fight for equal representation and just treatment of all models, as a model of African heritage. When other young girls that view modeling as a viable career see me and other models from their respective ethnic groups, it gives them assurance that they too can venture into the industry and make a mark for themselves. 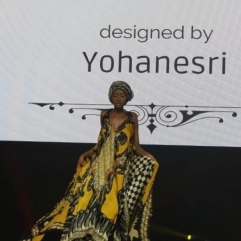 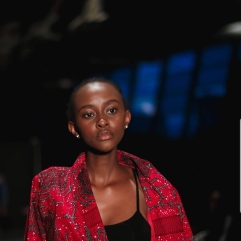 What have been some of your most rewarding moments?

I consider all the opportunities that I have had to work for various designers very rewarding, but if I am to narrow it down, I would give 2:

The first one was when I was selected as one of the few models from my agency, Angie’s AMTI, to participate in a casting call (modeling audition) that was being held in Montreal, Ontario, Canada, significantly far from where I live. I didn’t end up getting the job, though, because of my height, 5’7, which was slightly lower than their requirements. It was a very high profile casting, however, which gave me great exposure and I was grateful to have had that experience.

The second was when I had the greatest privilege to interact with Canada’s top international supermodel, Herieth Paul, who is also represented by my agency. I greatly admire her work and I was glad when our first interaction went exceptionally well — we discovered that we both speak Swahili and come from East Africa: I from Kenya, and she from Tanzania. We then exchanged contacts and have met quite a number of times afterwards. She is such a sweet soul and has given me a lot of insight on the modeling industry from her experience and that of others that she’s interacted with in her nine years of working as a high fashion model.

Any challenging setbacks so far?

The first was when my agency hosted its annual gala showcase in 2018, which presided over three days. The first day’s itinerary consisted of conferences, the second day consisted of an evening runway show, and finally, the third day consisted of an afternoon interaction and open casting with over twenty international agencies. During the casting, as we went from table to table with our model books and composite cards, we had the pleasure of meeting different agents, some interested and others not so. I vividly recall approaching about six tables that openly expressed their lack of interest in me and other models of color due to our skin tones. Within seconds, some agents firmly said, “Sorry, our agency does not represent models of your color because the market that we work for does not have an interest in your skin tone.” Despite the fact that I had been to a number of castings where I did not get the job and later on ended up seeing their model lineup consisting only of ‘white girls’, it was still a very hard pill to swallow as it was my first stark racist encounter.

After the casting when we gathered as models to share our experiences, I realized that the darker skin-toned models had had similar interactions with quite a number of the agents, while the caucasian and asian models had had pretty smooth interactions with most of the agents that they had approached. Beforehand, my agent had actually addressed the issue with me and other models of color. She informed us that we should be prepared to receive some remarks regarding our skin tone that may put us off. We had to be ‘professional’ about it by simply telling them, “thank you for your time,” and leaving their tables with a smile. Any other response would have cost us our careers and reputations within the industry.

The second setback that I often experience is being sidelined in castings due to my height — it’s funny because I always thought that I’m tall enough, being 5’7 without heels, but to my shock, when I started modeling, I realized that most high fashion models are 5’8 and above.

Valerie is so dedicated in everything that she does, including modeling, but how she’s able to juggle that with everything that she does has always been a question at the back of my mind. How does she do it? Stay tuned for part 3 where she addresses that, as well as her future dreams and plans, next Friday, August the 30th. And if you haven’t already, be sure to read part 1 where she shares her passion for social activism.

2 thoughts on “A Chat with Valerie Musyimi, an Up – and – Coming Model and Social Rights Activist (Part 2)…”